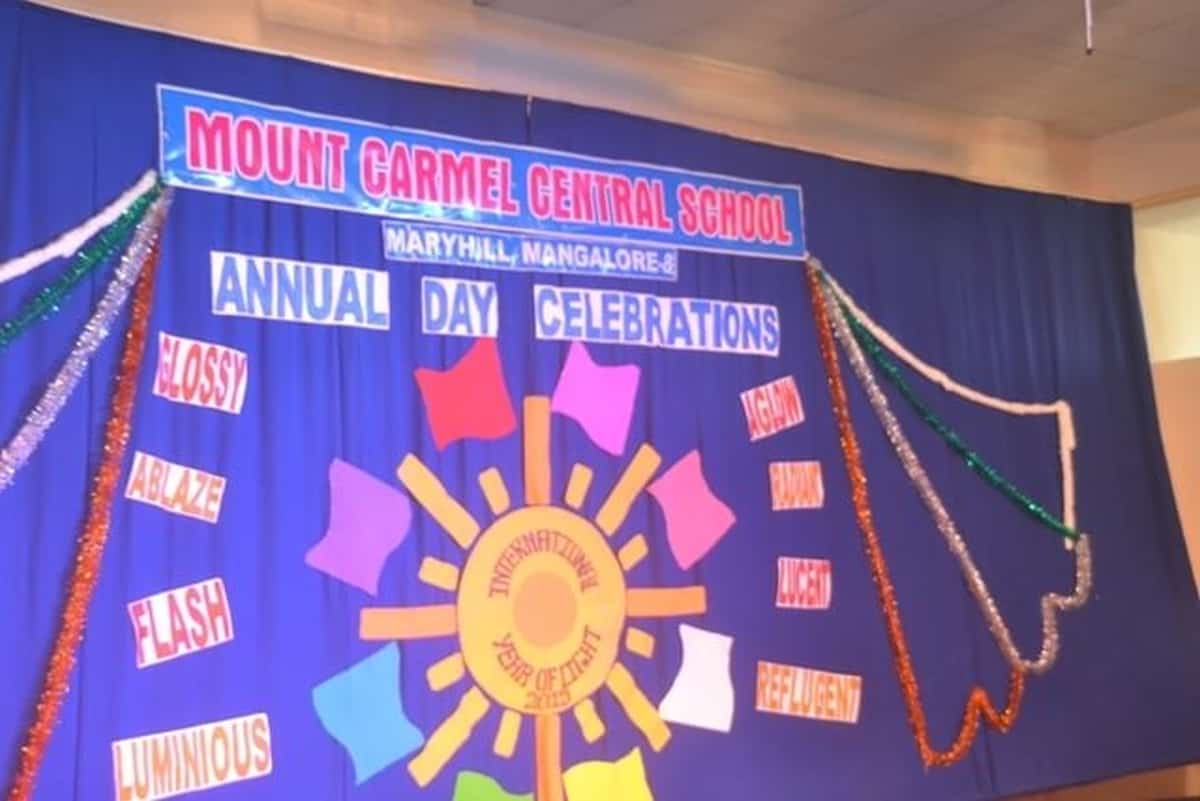 Posted at 04:30h in Celebrations by Mount Carmel

The Seventh Annual Day of Mount Carmel Central School was celebrated on December 5, 2015 in the school auditorium. It was an occasion where all students showcased their talents through dance, music and drama.

The programme began at 4.00 p.m. with the arrival of President Shri Amrit Paul, IGP, Western Range, Mangalore, Chief Guest Dr. T. J Quadros, President of AICS and Principal of Glowinstar Integrated School, Udupi accompanied by the school Joint Secretary Sr. Ida Barboza A.C, The Principal Sr. Melissa A. C. and the members of the management. Our guests were given an impressive welcome by the school band playing their rhythmic beats.

The school follows the tradition of seeking Almighty’s blessings before commencing any programme. Thus, once the guests were seated the evening began by invoking God’s blessings. India is known for its rich culture. Though we are modernized over the years, we still follow our age-old tradition of ‘Athithi Devo Bhava’. Our guests and parents were warmly embraced with a Musical Welcome Dance with a radiance of its own. This was followed by the welcome address by the Principal in which she cited that we believe that education is performance – i.e tests, assignments and class work. But today when we see our children on the stage, swaying blissfully, we believe that performance is also music, song, dance and drama – It is art and culture – the widening of the mind and the spirit, giving a brighter shade to education.

The first part of the cultural programme was a good mix of dance, music, drama, fun and frolic. It started with a vibrant mix of indigenous and exotic dance forms such as Bengali, Spanish and Arabic by the students of classes IV and V.

Next came a new and interesting performance: THE MIME SHOW on Swachh Bharat. It was not only humourous but also conveyed an important message which is one of the major social concerns of our nation. This was applauded with a thunder of claps by our audience.

Students of class VIII to X performed a variety of dances which comprised the three different cultures of India – Gharba from Gujarat, Lavani from Maharashtra and Ghumar from Rajasthan. The power-packed performance by the students set the stage on fire. Some from the audience were also seen grooving to the beats, seated in their place.

A drama on “Beauty is the Beast” was the star attraction of the evening. Every one enjoyed the twist in the story which not everyone is aware of. The story highlighted the theme “the inner beauty outshines the exterior”.

The second part of the celebration began with the power-point presentation of the Annual Report for the year 2015-2016. The report unveiled all the activities undertaken during the academic session and highlighting the achievements of the school and the students. ‘Success is dependent on effort and success is the sum of small efforts.”

Soon after the report, the guests were escorted to the dais as it was time for the stars of MCCS to be honoured for their outstanding performance in the field of academics and extra-curricular activities. Our chief guest, Dr. T. J Quadros gave away the prizes to the meritorious students of the academic year 2014-15. In his address, Mr Quadros spoke about believing in our dream to turn them into reality. He said that Education in its truest sense is the training of body, mind and soul and congratulated Mount Carmel for imparting such education to the students.

The top scorers of the Board exams of Class X and XII and the special achievers were felicitated by the President of the function Shree Amrit Paul. While addressing the gathering, he highlighted that the ascent of a Mount requires persevering effort to achieve the motto of scaling higher and being nobler. This is what we see and appreciate in Mount Carmel School.

It was now time again for our higher primary and senior secondary students to exhibit their creative inventiveness. The next performance to enthrall the audience was a subtle blend of meticulous pointe works, flowing and precise, weightless acrobatic movements, a Kerala martial-arts dance called Kalaripayattu by the boys of class IX and X.

Students of Class XI and XII hilariously portrayed the stages of life from childhood to college days in the form of dance.

Taking the theme on the “International Year of Light”, The Nightingales of MCCS entertained the gathering with their group songs ‘Feel the Light’ by ‘Jelo and ‘Flash Light’ by Jessy J, followed by a Tableau – Darkness to Light was presented significantly by students of Classes VI – VIII. It harnessed the fact that ‘Darkness cannot drive out darkness, only LIGHT can do that’. It also brought out the beautiful message which Lord Jesus gave to the world – that we are the light of the world and we need to be messengers of light and love.

The programme was ably compeered by Aaral, Megha Joshi, Adline and Sharol. The Vote of thanks was proposed by Mrs. Veena Madhusudhan. With this the celebration came to an end. It was indeed a joyous moment for the guests, parents, students and the teachers to watch and be a part of this gala day.