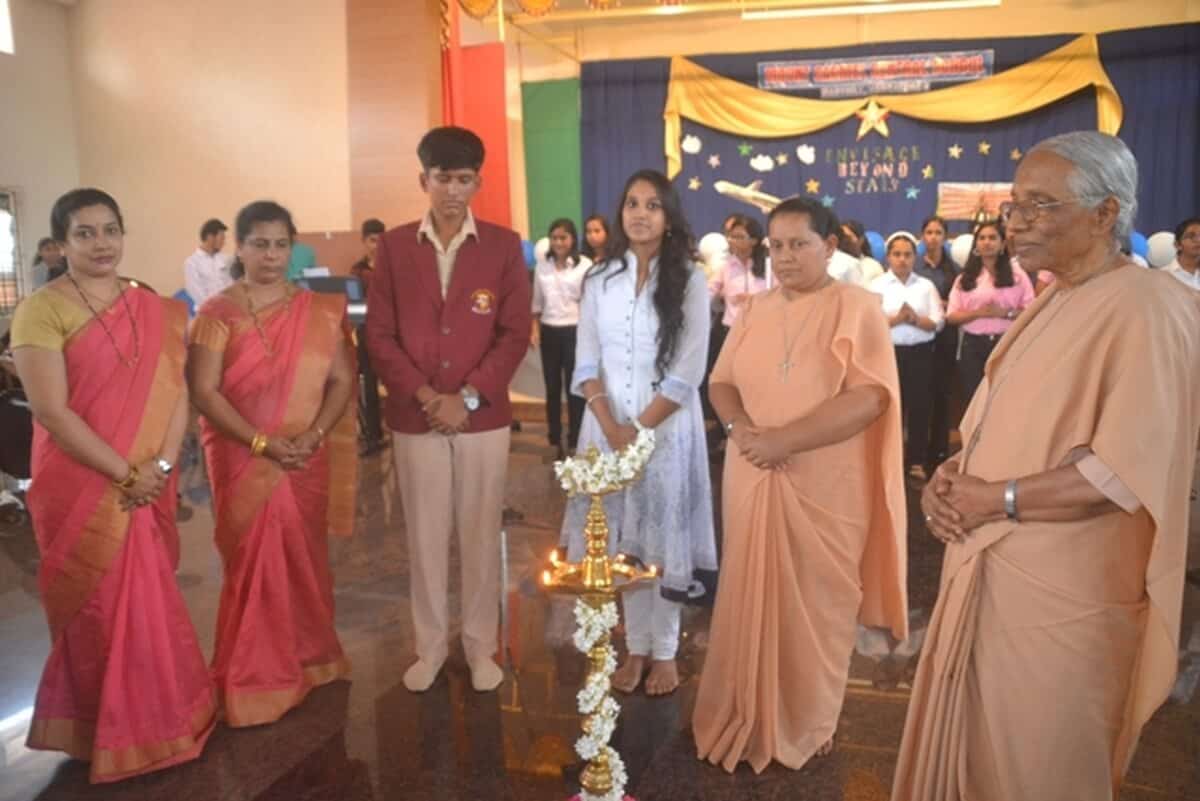 Posted at 04:58h in Celebrations, Media Coverage by Mount Carmel

The future lies before you like a hidden mass of snow
Be careful how you tread on it, for every mark will show.

As the 5th batch of class X and the 2nd batch of class XII leave the four walls of this school, the students of class IX gave a befitting farewell on February 13, 2016. Prior to the formal programme, a thanksgiving Mass was offered at Maryhill Chapel by Rev. Fr. Ravi Santhosh Kamath S.J., where he had a special blessing for the outgoing students.

The theme of the programme was based on a journey from the school (airport) to their destiny (success). The outgoing students were given their boarding passes to enter the ‘Air MCCS’ plane. The entire atmosphere along with the backdrop was designed to match the theme. The creative artwork by the farewell-giving students was much to be appreciated.

The outgoing students were welcomed by the MCCS air-hosts with a rose to each student. The programme began with the prayer service followed by the lighting of the lamp by the Principal, Sr. Melissa; Administrator, Sr. Carisimma; the senior teachers Mrs. Vidya and Mrs. Sylvia; the head boy and girl, Chris Cardoza and Radhika Bansal respectively. As they lit the lamp, the choir sang the shloka ‘Asatoma Sadhgamaya’ followed by ‘Light of the World’. Petitions were placed at the feet of the almighty praying for the “bon voyage” of our outgoing students. The prayer service ended with a Prayer song ‘Who am I’ by Casting Crowns.

The programme began for their ‘Bon voyage’ with a warm welcome by Sneha and Roshna Narayan. Our ever enthusiastic boys danced their heart fill and brought out humor and a dancing spirit among the audience. It was further followed by a humourous skit conveying the message that each one of us have our unique talents. It is in our hands to showcase them. The hall resounded with laughter.

The passengers were then activated by a round of games arranged by energetic juniors who created memories for their seniors as they leave the portals of the school. The first game played was ‘Look what’s inside’ where in the students were called to burst balloons which had ‘DARES’ inside it. Some other games like, ‘Guess Who’ and ‘Look Whose Walking’ too were played.
Songs, ‘Adventure of a Lifetime’ and ‘Wake Me Up’ were sung by the students which left the audience spellbound. The ambience turned groovy as the girls danced for the fusion numbers. The passenger students’ tapped their feet in response.

The Cherubim and Seraphim Angels of our school, Sheetal Pillai and Vanya Lobo put up their enrapturing song expressing their gratitude to the school, teachers and fellow schoolmates. It was now time for the students to express their journey at MCCS. The outgoing students Sharol Menezes, Aaral Montheiro, Daren Miranda and Chris Cardoza, Radhika Bansal, Deeksha Prasad spoke emotionally about their experience on what they gained and learnt when in school.

Principal Sr. Melissa addressed the students as they are ready to spread their wings and taken on the world. In her speech she told the students to live upto the Carmelite values the school has taught them and to remain true to the school motto “Higher and Nobler”. The administrator of the school Sr Carissima, speaking on the occasion, blessed the children and wished them well. As a mark of remembrance, mementoes were given to them. The winners of various school competitions were also felicitated on this occasion. The programme ended with the vote of thanks by Lisha Pereira. The Air MCCS emcees for the day were Calisha DSouza, Viona D’Sa and Bhawini Singh.

The programme was a memorable one. The beautiful and joyous day ended with sweet memories of life, sharing together the lunch along with the teachers arranged by the school Management.